have a better understanding of why

the PPO investigate such events;

it’s not a witch hunt to find somebody 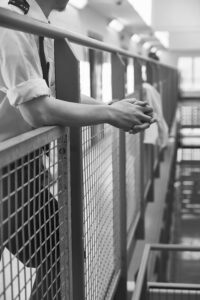 I’m James, the new Strategy Officer at the PPO. I recently joined the PPO after three years as a prison officer in a Category B London local prison. I started out a residential landing officer, then a supervising officer, and lastly a prison offender manager. I also spent some time working in a women’s prison and have visited a few other male establishments. This has, I believe, given me a moderately rounded experience of how the prison system is (or isn’t) functioning, which is something the PPO really valued about me and hoped would bring a useful perspective to the team.

My role is all about strategic thinking. I’m responsible for drawing up the PPO’s 3-year strategic plan and yearly business plan, with the aim to improve our ability to fulfil our goals. These goals are to carry out independent, objective investigations into complaints in HMPPS and deaths in custody. We do this to understand what happened, correct injustices and identify learning for organisations involved.

It’s that objectivity and impartiality that I wanted to take the time to explore here. Before I joined the PPO, as an officer, the Ombudsman seemed somewhat like the bogey man, out to get you and something to be wary of. But I’ve learnt this really isn’t the case. Before starting my role at the PPO, I did some research to get a feel for the organisation and was surprised to read positive things about prison staff in many reports, praising officers or healthcare for the professionalism and compassion they showed to prisoners in difficult times. It’s unfortunate that because we investigate fatal incidents and complaints, we’re much more likely to see mistakes than outstanding achievements. But even in these cases, I think its important prison staff have a better understanding of why the PPO investigate such events; it’s not a witch hunt to find somebody to blame. Where mistakes have been made, the PPO make recommendations to the services involved with the sole aim of preventing those mistakes being made again, something which everybody, both sides of the bars, can surely get behind. If HMPPS staff are open and engage with the PPO, it will result in a clearer understanding of events and better outcomes for the future.

What I can say now that I work for the PPO is that they do not pick sides. We don’t investigate on an assumption that services have failed or that what we read in complaints will always be the whole story. Instead, our investigators are professionals, trained to calmly and objectively gather as much information as they can to determine what actually happened, and what the reasonable next steps ought to be.

If I could make one request for those of you still working hard in one of the most stressful industries in the country, it would be to remember some of the core values of the PPO: we’re impartial and we’re fair. We don’t take sides and we always strive to be honest, act with integrity and work for better outcomes in HMPPS.