“Every year at least 30 prisoners

die accidentally as a result of 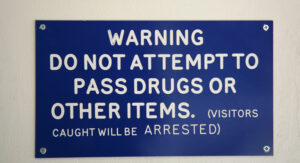 The Prisons and Probation Ombudsman (PPO), which is completely independent of the Prison Service, investigates prisoners’ complaints and all deaths in prison.

In Inside Time’s June issue, we wrote about our plans to recruit more people who have been in prison or have other first-hand experience of the criminal justice system. Thank you to those who took the time to write letters to us. It is good to get feedback from you and we always welcome it.

In recent articles, we have written about our work investigating complaints. This month, we focus on our investigations into drug-related deaths.

Every year we investigate one or two deaths where someone has deliberately taken a drug overdose, but that is rare. Most people who use drugs have no thoughts of dying – but every year at least 30 prisoners die accidentally as a result of drug use.

Many of these accidental deaths are down to psychoactive substances (PS), such as Spice or Mamba.  People often think that these drugs are not dangerous, but they can increase the heart rate, raise blood pressure, reduce blood supply to the heart, slow down breathing, and cause vomiting. As a result, we regularly investigate deaths where an apparently fit young man has died completely unexpectedly after using PS, from a heart attack or a stroke or from choking to death on his own vomit.

An example is 28-year old Mr A, who was regularly found under the influence of PS and was repeatedly warned of the dangers of using it.  He was found dead in his cell as a result of a heart attack caused by PS.

PS can also cause death when taken in combination with other drugs, whether those drugs have been prescribed or have been obtained illicitly.  An example is the case of 22-year old Mr B who was found dead in his bed one morning. The post-mortem found that he had used PS before he died and that he had also taken several prescription drugs – Subutex, diazepam and pregabalin – which had not been prescribed to him. The combination of these drugs, taken together with the PS, produced a toxic cocktail which had slowed his breathing, resulting in coma and death.

We also see accidental deaths while people are under the influence of PS, as the case of 31-year old Mr C illustrates.  An officer answered Mr C’s emergency bell and found Mr C sitting on the bed with his clothes burnt off and severe burns to most of his body. He was conscious and in a lot of pain.  His injuries were not survivable, and he died of his burns in hospital two days later. We found that he had accidentally set himself on fire while smoking PS and had not reacted until it was too late because he was under the influence of the drug.

Other drugs also play a part in deaths. Mr D, who was 26, was found dead in his cell one morning.  The post-mortem found he had died from inhaling his own vomit as a result of using heroin. Mr D had a history of heroin addiction and had been on a methadone detoxification programme in prison. He had almost completed this at the time of his death. He refused to work with substance misuse services and was often found under the influence of PS and cannabis, but he never tested positive for heroin.

Other prisoners told us that Mr D had bought some heroin on the wing the night before his death. Tolerance to heroin diminishes very quickly after even a few days of not using it, even among people who were previously regular users.  Although Mr D had not used a significant amount of heroin, he had lost his tolerance after not using it in prison for some months, and it was enough to kill him.

The loss of tolerance is a very real problem and also causes many of the deaths we investigate in probation hostels.

Apart from the 30 or so deaths that are directly caused by drugs each year, we also know that drugs contribute to violence and self-harm in prisons and it is impossible to say how many suicides may have been prompted by drug-related debts and bullying or by the mood-altering effects of drugs.

We have hesitated before writing this article as we know some people will find it upsetting.  But one of the most difficult parts of our job is speaking to the families of prisoners who have died, and if we can help prevent even a few deaths it will have been worth it.

We know that kicking a drug habit is difficult, but there is help available. We hope this article has given readers important information and food for thought and might lead people to seek help if they know they are at risk.

This article previously featured in Inside Time’s August edition, written by the PPO for prisoners.