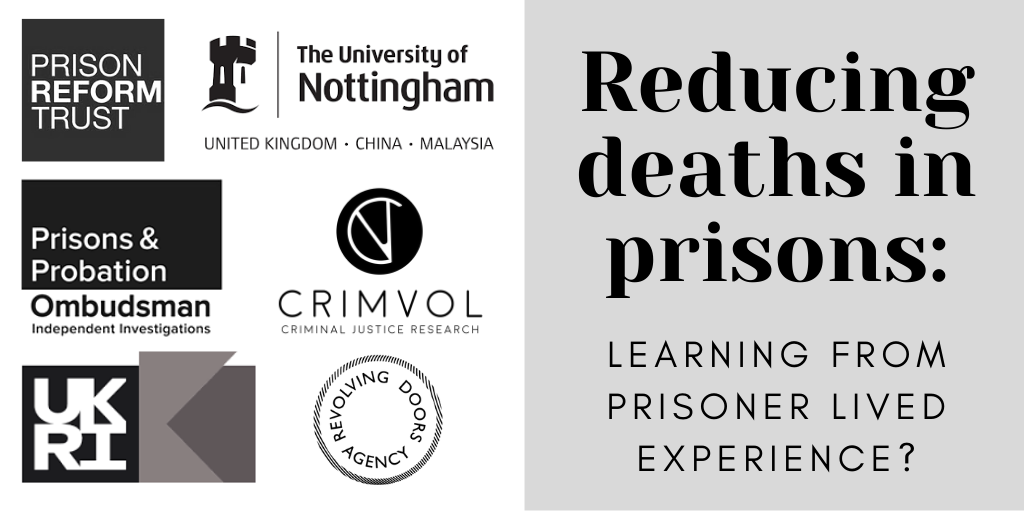 The Prisons and Probation Ombudsman is supporting an independent research project, led by Dr Philippa Tomczak from the University of Nottingham, considering how our fatal incident investigations and reports, particularly the recommendations we make, can have more impact. We want our reports to effect change in prisons, so that prisons are safer and there are fewer preventable deaths.

On 3 November, Philippa’s partners and collaborators in this project, including the PPO, held a webinar to give an update on, and an overview of, the research. We also used the event to launch two reports which represented the views of people with lived experience of prison on what made prisons, and prisoners, vulnerable to the risks of self-harm and, in the worst cases, to deaths in custody.

This article is about the experience of holding the webinar, a first for the PPO and for most of the other people who were involved in the planning, hosting, chairing and presenting, as well as the work that went on behind the scenes to make it happen. In these times of remote working and networking, the webinar has become a great way of bringing people together and a platform to share knowledge and learning with greater numbers of our partners and stakeholders than would have been possible in the days of travelling to conferences. We needed to get it right, and, we’re relieved to say, we did. These are some of the things we learned, recorded with enormous thanks to all involved in the event in whatever capacity.

Practice, practice, practice, especially if, like us, you’re doing it for the first time. We had difficulties getting everybody into the same virtual ‘room’, because we all came from different organisations and had different Microsoft Teams accounts. Our colleague, Soruche Saajedi, from Prison Reform Trust, worked tirelessly to find a solution and we had several failed attempts before we found the solution. Once found, it worked beautifully but it would have been a show stopper, literally, had we left it until the day and assumed all of us, chair and presenters, would be able to click the link and get straight in.

Have a backup plan. This meant for us, pre-recording our presentations, including slides with video and audio and loading them ready for use in case our live appearances met any obstacles on the day. In the end, we didn’t need them, but it was hugely comforting to know they were there, especially when we saw that more than 400 people had signed up for the event.

Leave long enough for questions. We had planned a 90-minute event, the last half hour of which was a question and answer session chaired by Sara Hyde, from Philippa’s team. The question and answer function on Microsoft Teams worked well and we were able to see the questions and select the ones we had the time and the information, to answer. But, we could, certainly, have had an hour for questions and still left attendees wanting. A note for next time, which we are already planning, by the way. Still on the subject of questions and answers, it was good to have the written record of the questions asked and we were able to follow up on some of them, going back to the person who had asked the question via direct messages a few days later.

The important role of the chair can’t be over stated, and we were lucky to have Sara, who was less new to webinars than many of us and who was also a very experienced chair. Sara was the thread that ran through the various presentations, introducing speakers and managing the (thankfully very small) stutters to the proceedings as new slides were loaded and presenters marshalled. Sara also, and most crucially fielded the questions, ensuring we kept to time, and that the questions reflected the theme of the event.

A week after the webinar, we met, virtually of course, to review how we all felt it had gone and how we felt now it was over.  Without exception, those who had been involved felt positive about the event, about how the information had been delivered and received and, importantly, about the fact that so many people had signed up and attended. This is, clearly, an area of research which is of interest to many people from a wide range of disciplines and sectors.

In this article, we have only mentioned a few of the people involved by name but there was a much larger group who made the webinar a success and who are supporting this research. It was a great example of collaboration across organisations and thanks go to everyone who played a part.

We are already planning the next one.

The reports on prisoner experience are available online: from Revolving Doors and from Prison Reform Trust.