WWW.PPO.GOV.UK uses cookies which are essential for the site to work. We also use non-essential cookies to help us improve our digital services. Any data collected is anonymised. By continuing to use this site, you agree to our use of cookies.

How to submit a complaint 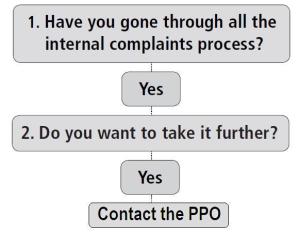 Our Terms of Reference set out the types of complaint that we are able to investigate.

We may be able to look at your complaint if you are:

The Ombudsman can investigate issues about the way you have been treated. This includes decisions and actions (including failures or refusals to act) relating to the management, supervision, care and treatment of those people listed above. You should always complain directly to the provider of the service in the first instance to try to get the problem resolved.

Before you complain to the Ombudsman, you must have gone through all the internal process or we will be unable to investigate your complaint.

We will only be able to investigate your complaint if:

The Ombudsman cannot investigate complaints about:

1. Your completed complaint forms (eg COMP1 and COMP1A if you are in prison) and any other papers relevant to your complaint. If you don’t have the complaint forms you can still complain to us but it will take us a bit longer to respond.

2. A short note telling us why you are not happy with the response to your complaint. There is no PPO complaint form.

Where to send it